I followed him through the streets of London. He was a way to find Rick Anderson, the leader of a terrorist organization. Rick was a good man before an incident took place in his life, it changed him. No one knows what happened to him.

The man whom I was following went inside a construction site. He did not see me. He stood there talking with some men, there were three men talking among themselves. It was show time.

“Oh! Look a police officer is here to arrest us. I am scared,” one of them mocked me.

The others stood there laughing.

“Where is your boss?” I asked.

“We do not work for anyone,” said the man whom I followed.

“Let us not fight, tell me where he is I will leave you,” I told. 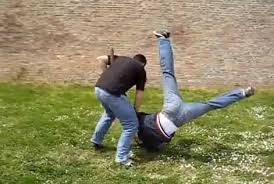 One of them moved forward and tried to punch me, I blocked it and punched him, then I twisted his hand and kicked him in the stomach. He fell down screaming with pain. Another one of those came to me and punched I could not block it as it was a really fast punch, it happened in a blur. Then I punched him in his face, then he kicked me in the stomach. I could not breathe for a moment. Then I got back to my senses and got hold of his left hand and gave three swift punches to his stomach. He knelt down gasping for air, I then hit him with my knee and his nose started to bleed. He laid down screaming.

The last man whom I had followed removed a revolver from his pocket and aimed at me.

I put my hands behind my head. He came near me. He was trembling and was very scared. As he came to me and touched the gun to my forehead, I quickly punched his nose, he was stunned, then I snatched the revolver from him and aimed it  at him.

“You know what I am going to ask you so its better that you tell me in good way,” I said.

“Okay! No one knows where he is. He always keeps on moving from one place to another. The last time he was in a warehouse, in Liverpool. That is all I know,” he said. He was really scared, drops of sweat running down his temples.

“Thanks,” I said and shot him in his left knee.

He fell down screaming with pain. I had move away from him as soon as possible. The police might show up any moment. After all I had shot a revolver and the gunshot echoed throughout the area. Well, at least nearby, and someone would call the cops and it would be a big story to make up and to tell them.

Now I had to go to Liverpool. I decided that I would go there the next day.

As I was walking down the road, or escaping from the scene, a speeding SUV came to a screeching halt right beside me and two men got out of it. Before I could pull out my gun or do anything else, one of them punched me real hard in my nose. It started to bleed and I fell on the ground and then there was darkness….

Someone threw water on me and awoke. I did not know how long I was out. A cloth was tied on my eyes so I could not see anything.

“So, you think you can arrest us, our gang, you are a puny cop,” said one of the men.

I did not know how many of them were there.

The answer I got was a punch to my face, a really hard one and I could not do anything about it because I was tied to a chair. I screamed faintly. I did not feel much good. Blood coming out of my mouth. It was warm and its taste being sensed by my tongue.

“You think you were kidnapped so that you could ask some stupid questions to me?” said the same man.

The other men standing there started laughing, I could make out that there were four of them in the room.

“Hey guess what I am gonna do with you. I will hit you, punch you, kick you, put you in freezing water everyday and everyday I will be changing the way I will be punishing you. Or should I say torturing you,” he said this and punched me again, harder than the last time and I fell down on the floor.

Everyone in the room started kicking me and laughing over me. One of them brought a baseball bat and hit my left knee with it, I screamed really hard, hoping that someone might come and save me.  But it was all hopeless because I knew that this place was really far from the city.

After sometime when all got bored of hitting me, they locked the room I was in and went away.  I was really hurt every part of my body ached. My face was full of blood.

But I had to escape from there, I had to do something or else I would end up dead and no one would be able to find my body. I was so exhausted that I fell asleep and the pain would get only worse the next day.

The next morning a man punched me I woke up with a start. The thrashings that I had got yesterday were showing their effects.

“Wake up. You got a whole day of torture,” he said and started laughing.

He was also walking beside me. I could make out that he was the only one in the room other than me. I was thinking of a plan about how to beat the man and get out of this place.

“Of course you fool,” he answered.

He was coming closer to me I could feel it. He came near my face I could feel his breath on my face, it was the right time. I kicked him in the knee or in thigh I guess because I could not watch him and stood up. I was lucky that they did not tie my feet to the chair, he was screaming. He had fallen down on the right side of the floor. I could make out by his sound. I ran and jumped, my back facing to the ground. I fell down and the chair broke. Freedom. I got rid of the ropes tied to my hands and then removed the cloth tied to my eyes.

I looked down, my vision took a few seconds to focus because I was blindfolded. The man had died, I jumped on his head and his head was bleeding really bad. I searched his body and found a pistol and a knife. I put the knife in my pocket and took the gun and opened the door of the room I was locked in.

I peeped outside the door and saw and two men were standing with earphones. They were playing music really loud that they could not hear the screams of the man I had just killed. I was fortunate that they were standing facing in two opposite directions with their backs facing towards me. I take them down without a single noise. I put the gun in my pocket and removed the knife.

I crouched and went slowly to the man standing to my left first. I put my left hand on his mouth and cut his throat with the knife in my right hand, he tried scream and alert the guards but he could not. I put my right leg behind his right leg and made him go to sleep. There was one more man to go. I walked till I reached him and then I did the same thing to him that I had done to the other man. I searched his body too and found a pistol. I kept it.

I was starving, I had to get some food and some water or else the exhaustion and the pain would only make me slow.

I kept walking and saw a refrigerator and I opened it. Looking at all the stuff inside made me go crazy, it was as if I was eating for the first time in many months, I ate until I felt satisfied. I had just closed the refrigerator that I could hear a man coming towards me.

I quickly hid myself behind a table. A man entered the kitchen and he opened the refrigerator, I sneaked behind him, put my right hand on his mouth and left hand on his neck and snapped it. A clean kill. He fell down without any noise.

I then went out and saw a room that was locked. I went towards it and looked through the keyhole. Rick Anderson sat there and three other members of his group. I knocked the door.

“Who is it?” someone asked.

“Its me boss,” I said in a different voice.

I removed the guns, one in each hand and got ready. The door was unlocked and a man opened it. I started shooting them, two bullets in his chest and he fell silent. The other men stood up and were looking for their guns and I  put a bullet across their heads. Only Rick remained. A machine gun beside him.

He took the gun and before he could aim it, I put three bullets in his body. He was dead.

Then I found the door to escape from the house. I opened and saw a forest. I did not know where I was.

Okay guys this the end of the story, I would like to hear your comments and I would like you guys to suggest me on which topic I should write my next story. Crime, Horror, Drama, Romance etc. Your choice.

Thank you for reading this story. I would like to have some feed backs, comments and you can point out the mistakes I made. I would like to hear from you and try to make my stories better, once again thank you. Comments please and also share it if you liked this post. Do read the ratings for the books by me listed at the top in the right corner.